DAV is the longest lasting veterans advocacy and assistance group in the US, and through their services and efforts they empower veterans to lead high quality lives with dignity.

Disabled American Veterans(DAV) provides a lifetime of support for veterans of all generations and their families, helping more than 1 million veterans in positive, life-changing ways each year. Annually, DAV provides more than 600,000 rides to veterans attending medical appointments and assist veterans with well over 200,000 benefit claims making the support of their donors pivotal to their ability to make a difference in the lives of so many veterans.

The field of flags campaign was conceptualized in 2016 as a method to generate revenue during the summer, an otherwise light fundraising period for DAV and for many nonprofits. The campaign offered the opportunity for donors to plant a flag a DAV headquarters, plant a virtual flag anywhere an on interactive United States map, receive a flag premium in the mail, or a combination of those options. Gaining momentum and quickly becoming a staple campaign by the end of 2017, the field of flags campaign was a big success especially considering the timing of the campaign during the summer months. To further build upon this momentum, CDR and DAV challenge themselves to increase the number of gifts by 50% in the 2018 campaign.

Launching the campaign on flag day, a matching gift opportunity was leveraged to quickly gain traction across the effort. Flag options were also positioned at lower price points than in previous years to lower the giving thresholds of potential donors. Because the campaign spans the entire summer (flag day to September 11), creative design, copy, and veterans’ stories were regularly refreshed to keep the campaign resonating with donors over the 10 emails that were sent. Audiences were also segmented consistently between giving types and other file affinity information over the course of the campaign to deliver targeted message delivery and create high relevance for the recipients.

Comparing results between 2017 and 2018, the strategy used in 2018 generated a 90% increase in gifts year over year far outperforming the 50% increase goal. This resulted in an 80% increase in email revenue in line with the strategy of purposefully lowering average gift slightly to generate a higher response rate and more revenue overall. Email metrics also performed extremely well, with a 50% increase in email response over two years despite a 75% decrease in overall email audience – a purposeful optimization to lift deliverability and segment out nonresponsive names. 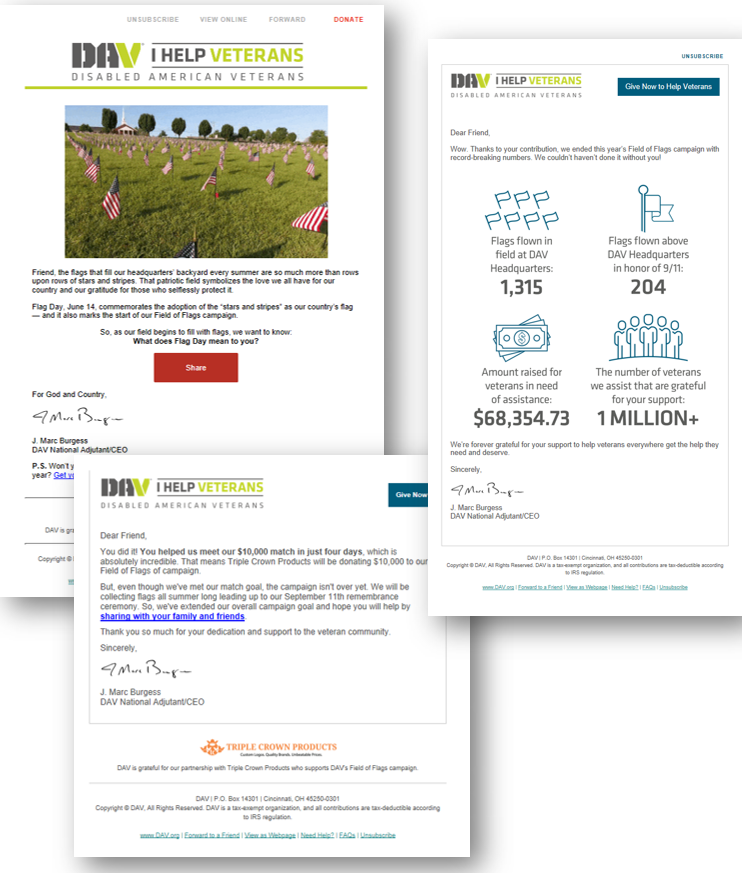